Looking back with the Tomasino Family

August 2016 marks the 20th year of operations for Scorpion Protective Coatings.  From the early days of spraying a few bed liners to now being recognized as a worldwide leader in bed liner, protective coatings, and window film, one thing has remained:  Scorpion is family owned and puts its customers first.

Over the past few weeks I had the opportunity to reflect on Scorpion’s early days, present state and its future with members of the Tomasino Family. Below is a look back and look forward with Randy, Brad, and Clayton. 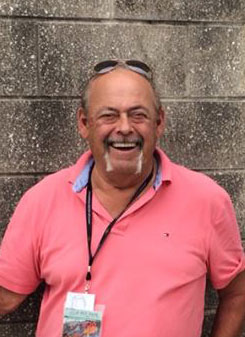 Can you tell us the events leading up to the development of Scorpion’s formula?
We had 5 years of extensive experience spraying polyurethane coatings for C.P.R. Upjohn in the early 80’s. Over one million square feet.  We knew what we needed and it was simple to adjust in the lab.  It was like baking a cake…. little tweaks until you find what works perfectly. We knew what worked in the field that was unthinkable in a lab.

What was your interest in bed liners?
I had a truck sprayed by a competitor’s brand.  It was so crude, still is, but we knew we could do it better, simpler, and faster.  Although the square footage was low, the margins were incredible compared to a large commercial applications and equipment.

Why the name Scorpion?
We ran about 20 names thru a test group in Indianapolis.  We were looking for an edgy, colorful name with attitude and an easy to recognize image.  Nothing else was even close!

What were the hurdles you had to overcome in the early days?
No one could believe what we were showing them.  We could demonstrate it right in front of them and they’d still think they were being tricked.  We even had problems with the formulators because they knew it wouldn’t work till they sent their chemists over.

Does it give you a lot of pride to see your sons taking on the business and leading it to new levels?
Of course, 1000x..but I could write volumes!  To me Scorpion is not a business, but a living thing. Like its name, it’s edgy and has an attitude.  They personify that and let scorpion be itself.  Everyone who is at Scorpion is that way, not just Clayton and Brad, everyone else as well.  They took a teenager and grew it into the spectacular adult it is. Scorpion blood runs in my veins and theirs. I could never have done what they have done.

How is retirement treating you?
It’s like eating desert and never have to worry about calories.  We get to do what we want, when we want.  The best part though, is getting to follow Scorpion’s success.  Retirement wouldn’t be near as fun without Scorpion. 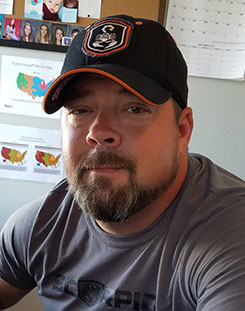 You sprayed the first ever Scorpion Truck Bed Liner, what do you remember from that first ever application?
I was nervous. I was a young man, fresh out of school. No taping or prep experience, never sprayed anything short of latex paint out of an airless sprayer. But as a testament to the material, we made it through and the truck turned out great!

Since the first, share some of your journey getting to where you are now?
Wow, where to begin. I was a very young man when I began to travel for Scorpion. Just a touch into my 20’s. I have traveled to every US state (short of Hawaii, never had the pleasure). Alaska and Puerto Rico are included in that mix. I have been to many countries outside the US as well, Canada, Fiji, Africa, Italy, Ecuador, Caiman Islands, Dominican Republic and Trinidad. I believe there are a few more that I just can’t remember. Everyone I have traveled to see were great people. I have experienced many things and many situations to prepare me for what I do now.

What is the most interesting training or R&D Project you did?
Hard to nail down just one. Sprayed a helicopter landing pad in the Dominican Republic, that was different. Sprayed Orange County Choppers’ trailer on a trip down south. Sprayed so many cool trucks and jeeps that I couldn’t even begin! I have had a hell of a spray career!

You have done just about every job there is to do at Scorpion, what role do you miss the most?
Hmmm… Can’t really say I miss any particular part. Traveling was cool, saw a lot of things that will be with me for a lifetime. I have been a trainer, spray tech, shipping manager and now operations Mngr. What I do now encompasses all the skills I have learned in my past. I get to relive everything on a daily basis.

Many of the other Scorpion team members lean on you for the in-depth technical side of things, how does that make you feel?
Makes me feel proud of what I have achieved in my past and all that I have learned (sometimes the hard way)! We are all buddies here, so any lessons I can teach or pass on, only strengthen the company. I’m still learning every day, myself. You can never have enough knowledge. 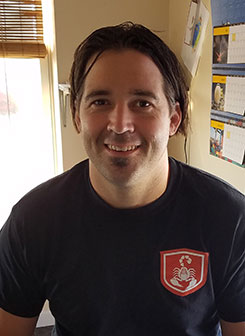 You stepped away from the family business for several years.  Tell us the experience of returning.
I was ready, after working in both South Carolina and Hawaii it seemed like the natural next step.  I returned as the CFO in 2007 and wasn’t sure what I would find after being away for so long.  The economy was good and the truck market was strong.  The market going south in 2009 made things difficult, which was the same year I was appointed CEO.  Things got challenging for a while, but we survived.

We know you are not the type of person to ever be content, but do you carry pride leading a company that has been on the INC 5000 list 3 out of 4 years?  I was definitely excited when first announced, but it did leave me wanting more.  Overall, it was huge accomplishment for our team because it shows a level of consistency and a determination to outpace the competition.  We also accomplished this while GDP numbers were low and we well exceeded those numbers.

Tell us about the other stops on your career path before Scorpion.
After completing my Under Graduate work in International Business, I worked for a commercial construction agency in Charleston, SC.  I started as a Warehouse Manager.  My next stop was in Hawaii for a commercial sandblasting company.  I then transitioned to Accountant for the University of Hawaii at the Waikiki Aquarium.  Quickly though, I had additional responsibilities handed over to me; inventory, scheduling, logistics, and staff supervision.

Your background is diverse, was taking over as CEO a smooth transition for you.
It was very smooth.  It really went seamless.  A couple of years here as CFO sure helped, but the team welcomed me from day one.  I did have a bit of apprehension about returning to work for my father and coming into a position above my older brother.

What it is about Scorpion that give you the most pride?
The fact that I was able to help my father do some of the things he wanted to do like retire and travel.  I also take a pride in seeing Scorpion have an impact in this community.  Then there is the impact on other small businesses all over the world that use our product.

Establishment of Scorpion Window Film
I felt that we needed to diversify.  We had survived the economic turmoil and oil prices had sky rocketed.  This left a huge cloud over the entire truck market.  Window film fits our brand and is not too far of a departure from what we currently do and is a high growth industry.  We developed great vendor and manufacturing partnerships and it had payed huge dividends.

Where do you see Scorpion Protective Coatings 10 years from now?
Scorpion is always interested in expanding into the specialty coating market. Also, there are other product lines that closely mirror our current offering.  Over the past few years, we have made a strong emphasis on the local community and want to continue to strengthen this endeavor and get even deeper into early childhood education programs.